The calculation of the absorption coefficient is made in several steps that are described below:

Every step of the calculation has been the object of an independent study of the scientific literature. 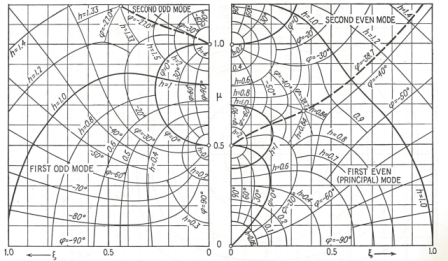 Acoustic Characteristics of the Porous Materials

ZORBA lets the user choose between 9 different models of sound absorption to predict the specific impedance and propagationcoefficient.

The Allard and Champoux model is the default model, but Delany and Bazley is also a commonly used model.

Impedance of the system

From a system whose impedance is , the impedance of this system after the addition of a layer of porous Material whose characteristics are (Specific impedance Z), (Propagation coefficient y) and L (Width) is provided by this formula:

It has been more complicated to find an accurate model of the influence of the different facings. In order to get the best results, our model include some theories of Reynolds, Smith and Kosten [2] to quantify the effects of the distortion of the acoustic field in the areas close to the holes, and a method developed by Mechel [3] to describe the behaviour of this field inside the holes.

For the Random incidence absorption coefficient, ZORBA's theory is inspired by the work of S.I. Thomasson [4], that not only considers the angle of the propagation of the sound, but also the effect of diffraction at the edge of the absorbent surface.

If you are interested in reading more about the theoretical background that Zorba is based on, the following references provide an excellent introduction.

4. S.I. Thomasson, "Theory and experiments on the sound absorption as function of the area", Report TRITA-TAK-8201, Stockholm may 1982.